If you have heard the popular phrase, marriages are made in heaven, then you are definitely old school. Things have changed but you haven’t. The theme in vogue goes something like this – marriages are tweeted on twitter.

I ain’t kidding y’all. A couple in the US are planning on getting married through tweets, and the wedding is planned for the coming Saturday – 19th June, 2010 at 4PM CET.

Sara and Paul, the tweet-bride-to-be and tweet-bridegroom-to-be will be united together and twitter will be their engine to broadcast the good news. The wedding will be held in an imaginary Mobile, Alabama. It will be streamed live on Suburban Oblivion and Paul O’Flaherty. The reception, hosted by @wigenout and @imwigen, will be a Tweetup. It will also be live-streamed. The bride and groom are registered at #paul&sara.

The two met over a blog post, argued over each other’s opinions. They started to date, and shortly after, Paul proposed at tweetup. Ever since, they have ventured out together, and run a website as well – Daily Shite. 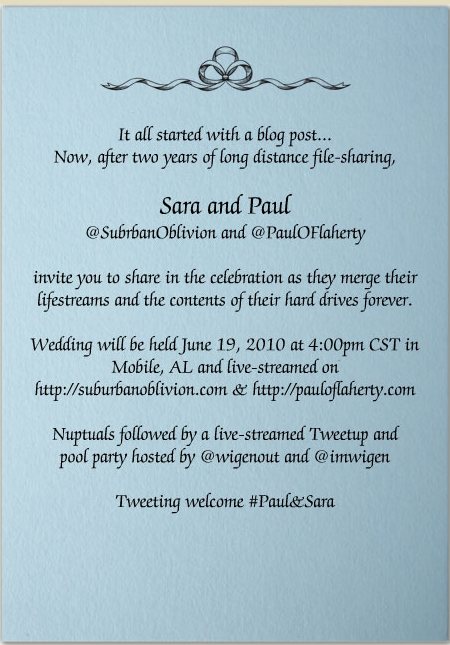 I just happend to see your website. It looks impressive and quite informative as well.

I am sure it takes a lot of rigours reading and research to come out with such an informative stuffs.

Meanwhile, I just want to request to
guide me with the basic information to pursue a carrier in service management sector.

I shall be waiting for your response with great anticipation.