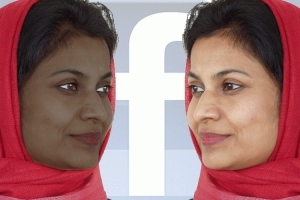 Indians have a special liking to the fairer skins and Vaseline has exploited their liking with the launch of a new app for Facebook. The sponsored app lightens your skin color and makes you look fairer, as fair as you want to be, or should I say, the app helps us with the Michael Jackson effect.

Vaseline has recently launched a fairness cream for men in India and this app will certainly bring them the moolah. More than anything else, the technique and strategy employed in this regard should be applauded and it makes the product worth a buy.

The app does more. It has a social networking feature — after you create a new, fairer avatar of yourself, you can share it with friends and create a gallery with a variety of images to be displayed on your Facebook profile page. What this means is obvious: Vaseline wants to remove whatever taboo is left in the usage of these creams.

The fairness obsessed country is digging hard into the app and 600+ fans have thronged it since its launch.

So, the next time you see a pic on facebook, especially from India, imagine him or her to be two to three shades darker, and the situation can be quite embarrassing for the person who has gone through trial by app, and the whole saga is an open secret of sorts.

India is not a racist country, everybody here emerges from the same race. But, the race to white-dom will see the fairer skins will achieve lot more in industries where skin color does matter.