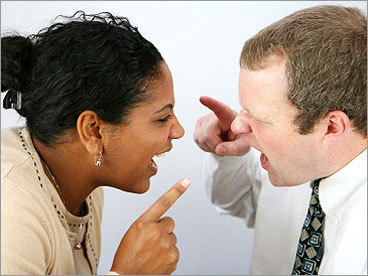 For example, if your manager asks you to plan a project, and you do so based on your intuition, skills and prior experience. Your manager reviews the plan and wants a few changes to be done. The project plan which is your baby is perfect as it is, because you are the creator right? So, you start to fight with your manager tooth and nail, and finally you are made to alter the plan. Let’s say he pulled his rank on you.

Once you get out of the project planning topic, you detest your manager for being such an ass that you don’t talk to him nor heed to what he is saying over the next few weeks. Why? He disagreed with what you had created and were not a party to it.

After a few weeks, he invites a few colleagues including you to join him for a drink. You refuse. You know the reason!

What you are essentially doing here is converging your professional life with the personal relationship that you have with your manager.

Your manager could be so damn wrong in making you do what he wants, yet, not wanting to talk to him, not willing to spend time with him because he did ‘that’ is totally so not cool.

Being truly professional means that you literally fought with your manager in the conference room and on the very same night, you could sit together over a pint of beer and laugh about it.

By interfering the two spheres, you are essentially spoiling what good you could have made from the personal front.

As is, it is hard to make friends, friends who can spend time with you. People from office spend the maximum amount of time with each other and can potentially become the best of friends. Unless, it gets in the way of mixing up of the two worlds.

You know what the root cause is? EGO. Yes, I have capped it because it deserves all the attention it can get.

You did not want to see your manager after the disagreement because your ego got in the way. Your ego wouldn’t let you befriend a person who nipped your creation.

Ego kills relationships, puts you on the pedestal and deserts your friends and family. It is easy to breakaway from relationships, and making one, as you have experienced, is a lot harder.

When you encounter conflicts at work or at home, let the conflict be over an issue, and not against a person. People argue vehemently over ideas that they believe close to their hearts, but the argument must be aimed at the object of it. It must not be targeted at the subject who is on the other shore of the river.

To state plainly, if you get into an argument, make sure the argument stays on the matter of discussion and not against the person who is arguing. When you walk out of the room, keep the elephant (matter of discussion) in the room. Do not walk with it, you will find that you will be obsessed with it too much that you don’t see others apart from it. Outside the conference room, you must see your manager like you did before you got into the conflict. You can probably joke about how you are still emotionally attached to the point, and how you will pick up where you left when the meeting resumes.