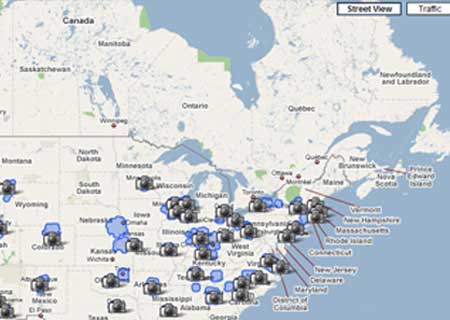 The IT capital of the Eastern hemisphere – Bangalore – is the first city in India to get imaged for Google’s Street View feature in Google Maps. All public locations will be shot using Google cars and trikes.

Google Trike – A special vehicle that houses the camera and has three wheels, similar to Indian auto-rickshaws. The camera is mounted on top, and the camera can rotate around its axis. Trikes can go off on any surface (except water and air of course) to photograph some of the most remote and beautiful places on earth.

Google Street View is the maximum level of zoom a Google maps user can achieve by zooming onto specific locations on the map. The user can see the neighborhood as though he was standing on the center of a street. This feature is available in about 27 countries, India being the latest addition through Bangalore.

The product head of Google India, Vinay Goel had some things to say – “We decided to start driving in Bangalore because it is the IT capital of India and feel that the IT savvy users will be able to leverage the benefits of the product to the fullest. Street View is useful for urban development planners, law enforcement agencies, househunters, and travelers. It lets users check out restaurants before arriving, make travel plans and arrange meeting points. Businesses can also benefit from the Street View technology by embedding Google Maps directly into their site for free. Hotels can use it to show off the convenience of their location, and restaurants can use it to raise awareness.”

Is Google doing things similar to what David Headley did in Mumbai and in Denmark?

Quite possibly! But, Google is adhering to local security policies, and blurs out faces and number plates. Still, people could misuse this wonderful technology to cause unrest in certain parts of the world.

Six Steps to Earning All Your PDUs