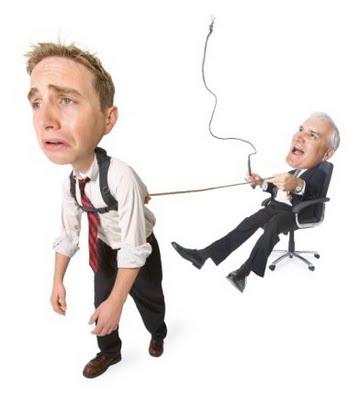 Organizations tend to keep wide distances between project and people managers. Some of the biggest multi-national corporations boast on the structure that shields project managers from people management responsibilities. It is also fact that such companies are not coming out on the top, and have begun look inside for loopholes.

Yes, when you separate project management from people management, you will not have a fully functional organization. It is like asking you mind to wander elsewhere while you body focuses on accomplishing something else.

Wayne Turmel writes of this anomaly and the so called perception that is brought about in the IT industry today. He says that the matrix organization is doing more harm than good as the project managers do not fully control the project members anymore. There is a separate people manager who holds all the aces while the project manager is left with the sole option of leading by influence and not by others means such as hierarchy. Given that project could range from a few months to a few years, the short term projects are bound to take a hit as influence needs time to build on.

Turmel goes onto state that the communication in projects is getting complicated by the day. I agree, and it will only get more complex. While an individual contributor on the project needs to be skilled in understanding the requirements and producing output in various forms, a project manager must be in sync with various individual contributors, their styles, their jargon and then translate all that is being fed into customer terminology. This is arduous, challenging and time consuming work. It is believed that in a project. 70 percent of the time goes towards communicating while the rest is for the actual work. In some companies, the percentage could rise up to 80.

A project manager is also expected to have visibility across the spectrum of the project and not deep dive into individual streams. While the same project manager was working as an individual contributor, he did nothing but delve deep into his forte, and in the role of a project manager he needs to bring in a transformational change to suit the needs of the role.

[…] need not be actively managed as long as the other two constraints are well managed. The number of resources in a project come at a cost, and they represent the cost of a project (plus the usual indirect […]