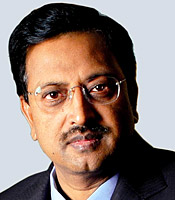 Satyam, the IT company that rose to the pinnacle at a record pace, the company that successfully managed IT through the FIFA world cup in South Africa in 2010 is a story of white collar fraud. It is a story of how a market can be played through bogus projects and made-up revenues.

Byrraju Ramalinga Raju, the founder chairman of Satyam was one of the brains behind the fraud. He conspired with other executives to work out the nuances of market jugglery and successfully came out to increase the share demand multiple fold and thereby increase the value of the company.

He is now convicted and behind bars. He has to cough up an excess of 3000 crores rupees and is barred from participating in market transactions for 14 years.

There were several fixed deposit accounts that were accounted for during the audits – but most of them were found to be fakes without account number in some cases.

The false revenues reflecting in these bank accounts were substantiated by fake invoices generated by the company. The inquiry led by SEBI confirms that 7561 invoices were faked using the invoice management system. These fake invoices amount to 4800 crores rupees over a period of five years (2003-2008).

Sometime before the fraud came to light, one of the internal auditors had shown interest in one of these fake invoices. He was immediately put into his place and removed authorization from further accessing financial documents of the company.

It was also reported that pseudo teams were formed to work on these fictitious projects and people on the project did nothing but sit around.

“I am now prepared to subject myself to the laws of the land and face consequences thereof” – Raju confessed in 2009.

By overstating the cash, revenue, profits and debtor position, the share value of the company hit the roof in record time. Raju and other founding members dispensed of their shares during this time and made killing profits. They also pledged some of the shares to raise more money.

According to the investigating authorities, the fraudsters made close to 2000 crores rupees. The penalty adds a further 12 percent annual interest on the fraud money.

Since the fraud came out in the open, Satyam has been acquired by Tech Mahindra, and was renamed as Mahindra Satyam before getting merged with the parent company.