This is a touching story and a booster dose for all the people managers and wanna-be people managers. The story in short goes something like this – a well admired CEO who cared for his employees gets laid off and that results in a companywide strike – heralded by employees and supported by customers. In the end, evil is defeated and employees win back their beloved leader.

Market Basket is a New England grocery chain store. It has 71 outlets spread across the region and hires about 25,000 employees – on roll and on contract. 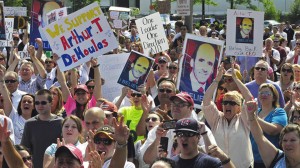 he grocery chain is a family owned business with warring cousins fighting over the mantle. Both cousins share the same name – Arthur Demoulas.

Arthur T Demoulas, has been serving the grocery chain as CEO since 2008. His strategy was simple. Share the profits with employees and shareholders alike. He provided financial help to his employees who were in need and remembered the tenured employees by names.

Arthur S Demoulas, gained control of the company earlier this year by buying out minority investors. His motto was simple. Profits go back to the shareholders and not to employees. When the CEO differed in this approach, the majority stakeholder decided to fire his cousin.

When the news of sacking spread, employees from all the stores stormed out of the stores and stood protesting against the decision. They risked it all, as they were certain lose pay, and probably their jobs as they did not have the backing of any unions.

Customers were left stranded and were not able to buy any products off the shelves. Some customers joined in the protests as well.

The protests prompted the family shareholders to convene an emergency board meeting and allow Arthur T Demoulas to buy 50.5% of the stocks from the other Arthur at $1.5 billion. The CEO got the job back, and the conglomeration of protesting employees and customers won their trusted leader back.

There are lessons to be learned from this episode.

If you take care of your employees, they pour out their loyalties, which reflects in the service quality – eventually increasing customer satisfaction and hence higher revenues.

Attrition is minimal in such situation which helps in increasing the capability of the establishment, and it resonates with increased productivity.

To conclude, if you become a caring leader, all the other aspects of leadership takes care of itself.

Will PM/PPM Software Solve Your Project and Portfolio Management Problems?