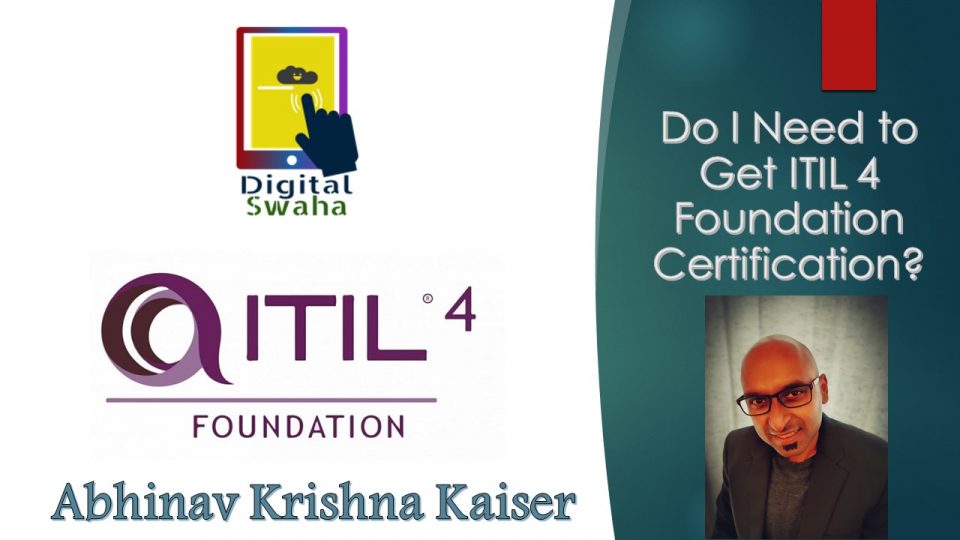 A common question that I get asked frequently is whether ITIL 4 is worth it. While ITIL v3 ruled the roost, what role does ITIL 4 possibly play is what the critics murmur on various forums.

In this video, I have (hopefully) tried to put the lingering doubts to rest! My book on ITIL 4 foundation certification is in the market.

The question that I often get asked – I already have ITIL V3 certification. Do I need to get ITIL 4 certification as well?

It’s an interesting question considering that ITIL V3 is a beautiful framework that is stable, logical and most importantly, it delivers.

Before I answer the question, some timelines for us to brush over.

ITIL V3 was introduced in 2007. Four years later there was a minor update. So at the time of recording this video, ITIL V3 is about 14 years old. In IT, there are changes in technology and frameworks every year, and there’s an overhaul in about every 5 years.

Given that ITIL V3 was contextualized for late 2000s, would it still be relevant today?

The answer is plain and simple NO. It just cannot, no matter how beautiful it is. We are in the age of speed, the time when patience is no longer seen as a virtue. In the time of instant results, ITIL V3 was found wanting, and that’s the truth. Although ITIL was non-prescriptive, it still needed a refresh.

Before ITIL 4 hit the scene, I wrote a book called Reinventing ITIL in the Age of DevOps. It is based on a framework that I designed to retrofit ITIL in a modern IT organization – an organization that works in a DevOps mode. The reinvented framework is adopted in a number of projects across organizations and continues to be implemented and customized.

In 2019, ITIL 4 came into be. The new service management framework was designed for organizations in the digital age. The original ITIL concepts were reimagined to work in an iterative manner rather than sequential. The concept of processes and functions were done away with, and a new concept called practices replaced the two.

Coming back to the original question, should you get the new ITIL certification in your bag?

The answer is yes. As organizations continue to wear the digital badge of honor, they would increasingly look for professionals who are moulded digitally, and one of these is ITIL 4. It is important as a professional to understand what the new ITIL is all about and get the certification under your belt. Even though you might want to read about the new concepts and get a grasp on the refreshed version, don’t be lazy. Get the ITIL 4 certification, mainly for the employer who would look for it.

So, if you are working in one of the ITIL roles such as an incident manager or a change manager in the erstwhile ITIL v3 environment, the release of ITIL 4 is not going to shake your world. You will not be required to relearn your process and the role requirements. I want to assure you that you will continue playing the role, as both the ITIL versions are the same in the core. But, you will need to pick up the upgraded certification if you need to progress – either into a new organization or jump into a different role in your current organization. It is your ticket to exciting opportunities.

As you are aware, I have been working on a project to refresh my book on ITIL V3 Foundation certification. The second edition of the book, Become ITIL 4 Foundation Certified in 7 Days is now published. As the title says, it helps you earn your ITIL Foundation certification in 7 days. All that you need to spend is about one hour every day for 7 days, and at the end of the seventh day, you will be ready to write the ITIL 4 foundation exam. The book is written and organized for working professionals who need to manage between work and study. I have included plenty of sample questions, and have answered several frequently asked questions pertaining to ITIL based careers.

Get your book and get cracking for the ITIL 4 Foundation exam. Share your thoughts on the book, the exam that you faced and tips for other professionals who are beginning the ITIL 4 journey. Cheers!

Everything You Need to Know about Digital Transformation! Really?