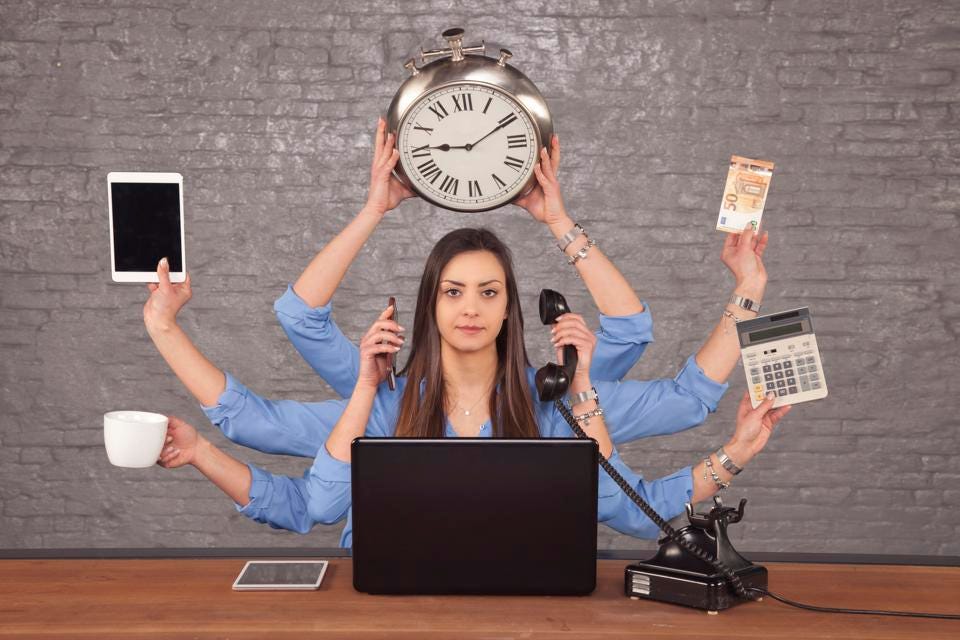 How often is it that you get hit by a ton of bricks, and you enjoy the moment. Crazy right, it happened to me.

I bumped into an article by Ozan Varol, a self proclaimed rocket scientist turned professor. What really caught my eye more than the article, is a mathematical equation. It read:

At first, it seemed like a harmless equation. Then I thought that it could be a trick question. The more I studied it, the numbers seemed okay. There was absolutely nothing wrong with it.

As I read the article, which I should have done in the first place before analyzing the equation, the point that Ozan was making was something that we all know. He says:

What is interesting is that when two numbers are multiplied, you would expect the result to be greater than the individual numbers. Which is not the case here!

Extending this concept to our lives, Ozan says:

“When we operate at a fraction, we compromise the output.”

Operating at a fraction is pointing towards multi-tasking. This hit me like a ton of bricks as I said before, because I multi-task all the time. By multi-tasking, the output that we produce is never going to be the best we could possibly deliver.

I always thought that I was good at multi-tasking and boasted about it in during casual conversations with friends and colleagues. Operating at a fraction has its pitfalls, so I put it to test. The last 3 weeks, I have mostly done unitasking. I say mostly because at times I had to send a mail or two or respond to chats while I was in a meeting.

I also spent time after completion of an activity to note down the differences that I felt between multi and unitasking.

Here is my experience from unitasking. I found changes especially to the following four aspects.

My biggest takeaway from unitasking is the awareness of the situation and the complete focus that I could put into the task that I was performing. Immersing myself in the activity gave me a sense of mindfulness that took me to a different level. I was fully in control of the phrases I spoke, the words that I used in my emails and completing every activity gave a sense of satisfaction which I can’t put the words to describe with.

I felt that my decision making was more weighed and judicious when I didn’t have anything else to do other than the decision to make. When we make decisions, we need to consider all possible factors that have a role in it. Unitasking, helped dig out these factors. I can’t tell for sure, but I believe that it may have been possible that I could have missed a few factors if I was taking decisions while sitting in a meeting.

As I mentioned earlier, I was fully aware of the situation and mindful of every activity. The decision making too improved. Both these put together, I can state with certainty that the quality of the products that I produced were much better. This to me was going to be the major difference between multi and unitasking. I find quality as a byproduct of mindfulness and good decision making.

If you thought that my productivity went up due to unitasking, then you would be wrong. It actually dipped, to my surprise as well. I was taking a longer time to complete activities that otherwise I would have completed earlier in the day. While I multi-tasked, I could churn out tasks as though I was dealing cards in a game of rummy. But with unitasking, getting every task done demanded certain amount of dedicated time. This in turn, helped me prioritize work better, discard unwanted activities and delegate the ones that can be delegated.

If I have to weigh in on multi and unitasking, and give a judgment, then it is always going to be unitasking. To state with an example, people may have to wait longer to get responses to their emails from me, but rest assured, the words expressed come from an undistracted and uncluttered mind.

Ozan by the way puts it this way:

“Hello activity. It’s great to meet you. I’m choosing to engage with you. I’m going to treat you like you’re the most important person in the room and ignore everyone else.”

The benefits of unitasking far outweigh the drawback of productivity and time taken to complete activities. If we believe that we do serious work that matters, then we must opt for effectiveness over efficiency.

Mother of all IT Sins: Not Proofreading