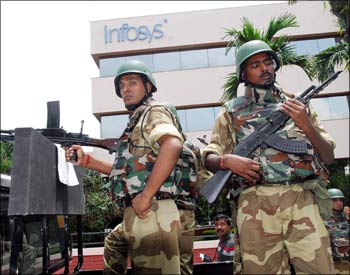 What could be more shocking than a bomb going off in a crowded market? For me, it is the news that IT professionals are surfing jihadi websites, and sending out emails to Pakistan in the same regard.

Security audits conducted in several IT hubs in Bangalore has revealed that some IT personnel are indulged in jihadi activities based out of India’s parasitic neighbor, Pakistan. As one would expect, the communication is via the internet and staffers are caught surfing and posting messages on radical Islamic sites and blogs during their work hours as well.

“Some of the IT employees found indulging in suspicious internet activity are well-to-do professionals who devote a very small part of their day at work to carry out their jihadi agenda,” an intelligence official pointed out adding that this gave them the perfect cover while executing their jihadi plans.

Earlier this year, five IT companies in Bangalore received emails from terrorists threatening to blow up their offices across the city. One of the companies was indeed Infosys.

Based on the threat, Government of India has provided security cover for Infosys, and anybody new to this update would be surprised to see a war like situation in the company’s campus.

IT professionals getting swayed is a heart breaking situation. One would expect IT staffers to be intellects, who can think logically and rationally, and the inverse radical thinking is somewhat of a surprise.