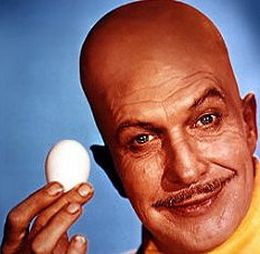 Evolution is a popular theory taught in schools, and the general idea is that humans and also the rest of the species are evolving over time – meaning getting better. There is also another populist theory that if something is not in use, it will be done away with over a period of time. My teacher in school told me that humans used to be hairy like the bears and gorillas. Man stitched himself some clothes, and didn’t need the body hair to protect him, eventually the body hair disappeared.

Scientists whenever they refer to the capacity of the human brain, don’t forget to mention that an average human being uses around 10-12% of his/her brain cells. Going by the evolution theory, if we aren’t utilizing the remaining 90% of our brain cells, it should ideally go away, right? That is the case! A phenomenon that scientists are studying is the size of our heads. Discover magazine claims that the size of human brain is gradually decreasing for the past 20,000 years.

“Over the past 20,000 years, the average volume of the human brain has decreased from 1,500 cubic centimetres to 1,350 cubic centimetres, losing a chunk the size of a tennis ball,” according to a Daily Mail report quoting Kathleen McAuliffe in Discover magazine.

This equates to holding lesser number of brain cells. So, the question is, are humans getting dumber or less intelligent as we continue to evolve?

If we are not using the entire number of brain cells, does it matter if a small portion goes away? No! I don’t think so. It will just make our statistics look better. We can probably start saying that I am using 30% of my brain cells.

My theory aside, some scientists believe that although humans are losing the brain cell count, today’s human brain cells are a lot more efficient than what it was, say around 20,000 years back. I think this theory is analogous to the processor chips. The size of these chips are getting smaller, but the efficiency is heading north.

The Leftist scientists believe that humans are getting stupider by the day, and there is no escaping it.

The scientists who take the middle ground amuse me the most. One such groups states that big heads were needed to survive the Upper Paleolithic life – meaning fighting the cold weather. Second theory states that the skulls were bigger to help with the chewy diet of rabbits, reindeer, foxes and horses. As the food became softer, heads became smaller.

Such inconclusive theories are innumerable. I have read at least a dozen other stories why our heads are growing smaller. For me, I am sure you would agree with me as well, small heads look perfect. I don’t want to bear a large head and look like an egghead. Have you ever noticed people with unusually big heads? It makes us take notice of them, and maybe let out a smile when our visions don’t meet.

Regarding humans getting dumber, I don’t think so. My personal belief, is that the next generation is coming out smarter than their predecessors. Size does matter may not work in this case. We are getting a lot more efficient.