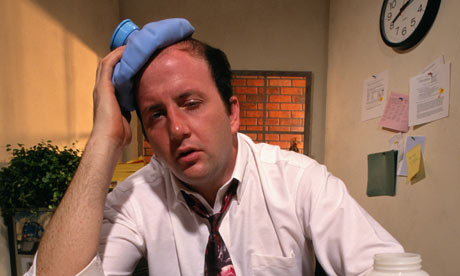 A survey conducted by Australian workforce managers Kronos has some interesting piece of information that managers would be most interested in. Majority of survey respondents have admitted to faking sickness to avail leaves. China and India lead the pack, followed by Australia, Canada, USA, UK, Mexico and France.

Chinese fakers stood at 71 percent, while India was not far behind at 62 percent. In fact, it is surprising to see Australia at a close third – 58 percent. French men (and women) are most honest at 16 percent.  Canada and US at 52 percent, UK at 43 percent and Mexico at 38 percent.

Other reasons to bunk office include the need to care for their sick child, heavy workload, and lack of paid leave.

Once the sick leave was called in, employees mostly stayed at home and watched TV. They didn’t want to risk getting caught while shopping and taking joy rides I suppose.

This survey, the Kronos Global Absence survey was conducted online in July on varying sample sizes – between 1000 and 7000 employees. Both full time and part time employees were considered, and age limit was 16 and over.

What does the survey have to offer for people managers?

A lot. People get stressed, they are humans after all. Don’t over burden your employees, if at all you do, be flexible. Allow them to work from home or permit them to pick their own work hours. Most respondents preferred flexi timing as a positive trigger for them turning towards honesty.

Some managers ask a million questions before approving a single day’s leave. Avoidance of this could be a fake sick leave.

Some companies may limit the number of paid leaves, and don’t track sick leaves. This loop hole could potentially be exploited by employees. I believe IBM is one of the companies to have fallen into this trap. But, they are highly flexible and encourage working from home.

Some employees could just be too lazy to compose an email to ask for a leave, and end up texting or calling his/her manager for a sick leave.

In companies where a limit is placed on sick leaves, you could see that most sick leaves are availed towards the end of the year. Me guilty! ;)

Flexibility and integrity must work with each other. If companies don’t want to leave anything to chance, they should start trusting their employees, and offer alternatives to extract work. Employees on the other hand, must keep an open communication channel with people managers to take leaves at will, by stating the facts – bored of coming into work is a good reason – I have used it.