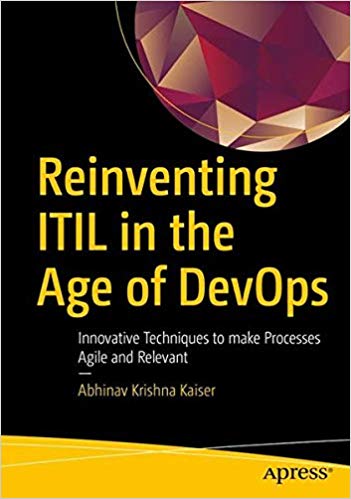 Many modern soothsayers predicted that ITIL will cease to exist when DevOps pace picks up. Well, DevOps has picked up rapidly in the last couple of years, and there is no talk of ITIL giving way to something else in the dawn of DevOps. In fact, I consult with clients to keep ITIL speeding along with ITIL. So what ITIL needs is not a replacement but an adapter for DevOps.

Reinventing ITIL in the Age of DevOps is my latest publication that pushes the boundaries of ITIL to cater to DevOps projects. It is a book that gets real, and on the ground to provide practical process modifications, team structural changes and all the bells and whistles that have to be finetuned for ITIL in a DevOps project.

The book is quite comprehensive that it looks at each of the twenty-six processes and the five functions for adaptation into a DevOps project. Plus, the major processes such as incident and change management processes among others are dealt in detail with the workflows, team structure recommendations and alterations to the ways of working to create synergy between ITIL and DevOps.

The book is scheduled to be released late this year or early next year. It is in the production stages, and a near exact date will be known in a month’s time.

I started writing this book earlier this year, and to date, this has been the fastest I have penned a book. My earlier books took me close to a year, and this one in comparison took me about 5-6 months. And Reinventing ITIL in the Age of DevOps is touted to be the biggest book that I have written.

What can Trigger Continual Service Improvement?

Products and Services: Explained with Examples

[…] been introduced for the digital age, it has not found favor in leaps and bounds. I penned a book (Reinventing ITIL in the Age of DevOps) around the same time where the yesteryear ITIL could still have some life left in it, if it was to […]

[…] my book Reinventing ITIL in the Age of DevOps, I go into the depth of what a DevOps team is all about and how it should be framed. In this post, […]

[…] my book, reinventing ITIL in the age of DevOps, I have discussed the nuances of a DevOps team and how it can be structured. There is no prescribed […]