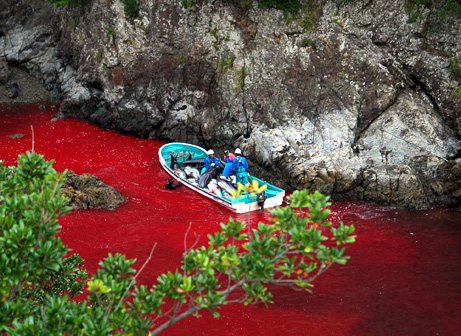 I was recently going through an article which pictures the horrible practice of killing dolphins in a small town called Taiji in Japan, by driving them to a cove. Here’s an excerpt:

Twenty-six fishermen in 13 boats corral a few dozen dolphins into a small cove, where they kill the animals by stabbing them repeatedly with long harpoons and knives. The 50-square-foot (4.6-square-meter) inlet turns crimson, as if filled only with blood.

In the course of a six-month season, fishermen kill roughly 2,000 dolphins and sell the meat to local supermarkets for about U.S. $500 a dolphin. The fishermen supplement their income by taking about a hundred dolphins alive and selling them for tens of thousands of dollars each to aquariums in Japan, China, South Korea, Iran, and Dubai in the United Arab Emirates.

I agree that it is a cruel practice, but how is it different from killing chickens and cows for meat. Even they are animals/mammals and they go through the same set of emotions as dolphins and whales.

When posed with this question, a smart activist Diani Reiss who is famous for discovering that dolphins can recognize themselves in a mirror says – “Taiji hunt must stop simply because it’s inhumane. Dolphins are extremely intelligent creatures that experience pain and suffering. I have listened to underwater recordings from the Taiji drive hunt and says the dolphins issue sophisticated distress calls.”

Reiss must be a blonde!!!

Does that mean none of the animals that are killed for food don’t experience pain, given the reason that they are not as intelligent and don’t send distress signals. Bull Shit! I had expected a better explanation from somebody who is worthwhile mentioning on the national geographic website.

All animals feel pain. If we are to stop an animal from being hunted, there should be a good reason such as extinction or harming the ecology. I am not buying any intelligence stories, sorry Reiss!!!